We started on location this morning at 9am sharp, so we had to begin a bit earlier. On our list of subjects today: a torilleria, a bakery, a butcher, a carpentry workshop, a coffee roaster, a dance school, and a sprawling market. If anyone had been wearing a step counter, they would have had a high scoring day! 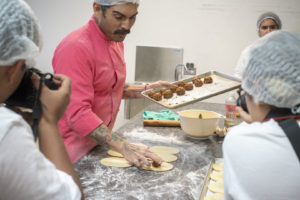 My favorite destination from the morning was the bakery for reasons other than the obvious. The proprietor of this great place (which specializes in traditional baked goods. Recipes from the 19th century when the French had a Monarchy in the region.) is exactly the kind of guy you’d probably never expect to make cupcakes. A nose piercing, a mustache like an actor from the cop show CHIPS, and tattoos up both arms aren’t the first things I think about when I think of an artisanal pastry chef (Although his tattoos are mostly of cupcakes, baking utensils, and Disney characters). Dressed in pink chef’s attire, Mauricio is every bit the kind of guy who would start the shop in Austin or Portland that would land on everybody’s “must visit” list. The pastries weren’t too bad either. Our kids had an absolute blast photographing in there and they managed to make some zinger photographs between sweet bites! 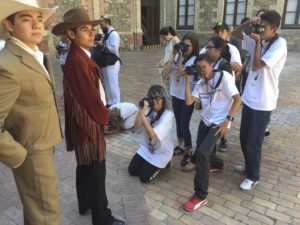 The other groups had to work for their images this morning, photographing each of the other locations, none of which was half as comfy as the bakery. But in the afternoon, after lunch, we were all treated to an excursion to the traditional dance school. There, dressed in full regalia, troupes practiced folk dances for us in the courtyard of a converted 14th century convent as the afternoon sun began to dip. It was quite the day! 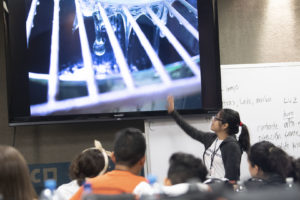 We did however, have one other noteworthy event: today the students delivered their own critiques to the rest of the class. We really like the exercise of having the kids get up in front of their peers and talk about their work. They have the opportunity to present the concepts we learned this week and share how they created their images. By the end of critique this evening we were all pretty worn out…the sign of a great day!