This morning, as we loaded into the van, we realized that it’s the last shoot day. We’ve been in Toronto now for twelve days, and we’re almost finished. Looking back over the ground we’ve covered with the beginner workshop and all of the things that we’ve learned about and photographed together, we can’t believe it happened so quickly. But here we are, driving from our hotel to the Aga Khan Museum for one of the few remaining mornings…we’re keenly aware of the time evaporating away. 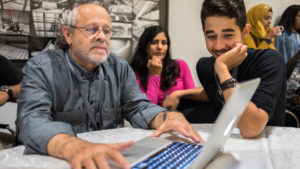 Like most mornings, we began with a critique of the images from last night but with a subtle little twist. Today, our groups shifted locations…with groups one and two going to New Circles where the other groups have already visited and vice versa. So the purpose of our critique was not only to review the images already taken for quality and creativity, but also to review the stories we were shooting and identify the types of images we needed in order to complete the visual narrative. This is a bit of a new wrinkle to throw at the beginner group and we’re going to see how well they respond. Not only do they have a limited amount of time to shoot, but they have to try and finish a specific story thread. Let’s see how it goes! 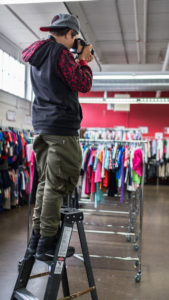 Like I said before, we were returning to the same locations as yesterday, only we’ve flipped the groups. Arthur and Sarah’s group headed to the Library and Wendy and Fred’s went to New Circles. The students New Circles were looking for a few shots but one in particular was a good overall image of the entire retail space. To get the shot the students were on ladders, desks, chairs, and underneath clothes racks, shelves, and tables. They were literally everywhere! When the students are in the flow they are great fun to watch.

The Library group had a slightly different program. In the STEM workshop, the kids in the library got to build and program robots! How cool is that!? Our students, again, were on top of desks and lying on the floor to capture the young kids working with the technology. We’ll see how good they did when we look at the edit tonight, but based on their on-the-job acrobatics, it looked like they did a great job!

Back to the library and New Circles

Critique of our images from yesterday.

The purpose of a critique.

Finish up the stories

And now a Blurb from One of our Advanced Students: Sara Addetia:

It’s our last day of shooting! We started our day with our daily critique. We saw a lot of amazing picture taken the day before. We then watched and listened to the interviews on CBC news and radio featuring our workshop. We then viewed Arthur’s work about the different places he has gone in the world. We ate lunch and headed out to our last on field shoot. The locations were the same but the groups switched. This time Wendy and Fred’s groups went and photographed at New Circles. While they focused on the G.L.O.W and the L.I.S.T programs, Sarah and Arthur’s groups headed to the Flemingdon Park Toronto Public Library. There they photographed the library and a S.T.E.M class where the campers were engaged in a robot programming activity. We then headed back to the Ismaili Centre Toronto where we ate dinner, downloaded, did our group critiques and picked our favorite photograph to print. We also celebrated Wendy’s, as well as some of our peer’s birthday. Overall a really successful day 6.