For the first time since arriving, I opened the curtains when I woke and saw the faint glow of the sun rising instead of the deep dark of the early morning.  After a long flight and a few sleepless nights, that silver horizon is a wonderful sight to wake up to. But during Fred’s introduction to the new beginning class, the scene was called back to me, when he said to a room full of wide eyes and nervous hands, “welcome to the first day of the rest of your life.” 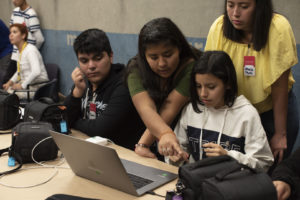 The transition from an Advanced workshop to a beginner workshop is an abrupt one.  On a morning that feels more middle-of-the-week than a new beginning, we arrive at the classroom to see 20 unfamiliar faces steeping in a room full of the kind of tension you get when you stuff a bunch of strangers together in a small space.   The topic of discussion changes from advanced techniques to the most basic details and we go from talking with old friends to new pupils.  The only thing that doesn’t change is the pace; these guys don’t have any idea what they’ve signed up for! 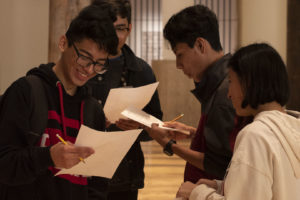 A while back we expanded our workshop schedule from 7 days to 8 in order to build in time for some inspiration, to break the ice, and to get some of the technical details out of the way.  We start with an introduction to the class by Fred and then everyone goes around to introduce themselves. 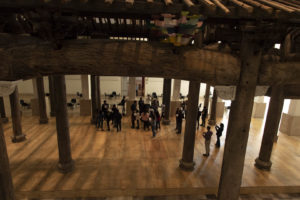 Once we’ve had a chance to give a bit of our story, the group moved from the classroom to play a game of Personality Bingo.  The students had to ask questions of each other and when they found someone who could match the question, they would write the name of that student in the square.  Cues like, “can speak 3 languages” were followed up with, “which languages?” and can you prove it.

It was a surreal sight to see Rollence demonstrating an ability to do 20 push-ups in under a minute, under the eaves of the Ai Wei-we temple exhibit!  How incredible that our students are going to learn a new creative language in the presence of one of our greatest contemporary artists! 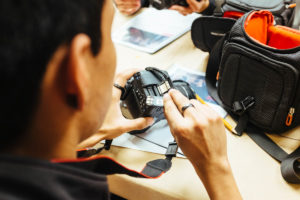 After introductions, the thrust of the remainder of our day is to get the students ready to begin learning manual photography.  Specifically, we needed to give the students a chance to get familiar with the controls of the cameras and computer workflow so that it doesn’t slow us down later.  We found that before we had this extra day, we’d answer the same question, for different students over and over again and it really had a drag effect on the flow of instruction. 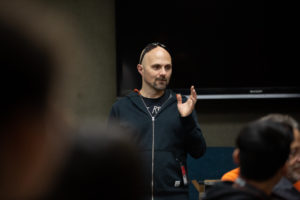 So, after the icebreaker and Fred’s inspirational intro, that’s what we did.  Mike led us as we got acquainted with the camera controls and practiced the computer workflow.  The students took to it pretty quickly and with the help of the advanced class students who’ve stayed with us, we should be in good shape going into tomorrow’s class.   The week will tell so stay tuned!