Toronto Star: Young photographers get their shot with program at Aga Khan museum

Young photographers get their shot with program at Aga Khan museum

Teenage paparazzi equipped with digital cameras have had the run of the Aga Khan Museum of Islamic art and civilization for the last four days, snapping pictures of ornate ceramics, rugs and anything else in the collections and backrooms that catches their eye.

The 20 shutterbugs, between 13 and 16 years old, are students in a photography workshop for underprivileged youth hosted by Fredric Roberts, a former Wall Street executive who ended his career in mergers and financing to travel the world and take photos.

“As the 70s became the 80s, and the 80s became the 90s, my taste for greed and corruption and the sort of thing that Michael Douglas made in the movie (Wall Street) were much less palatable to me,” he said in an interview at the museum, Day 3 of the weeklong, free course.

Roberts founded the investment banking firm, F.M. Roberts and Company, in Los Angeles in 1980. In 1993, he was chairman of the Board of Governors of the National Association of Securities Dealers, which owned and operated the NASDAQ stock market, according to his website.

He learned to use a camera on a six-week trip to Thailand, China and Tibet in 1986. But it wasn’t until he retired 14 years later that he rediscovered photography. At 58, he took a photo workshop in Santa Fe and returned to Southeast Asia. Pictures of his travels, from India to Cambodia and China, became the basis for his first book, Humanitas.

As much as he enjoys taking pictures, he says he finds it even more fulfilling teaching children to express themselves through photography. He gave his first photo workshop in Udaipur, India in January 2011 and has organized others in Tajikistan, Bhutan and Nicaragua.

From learning how to hold a camera, his students move on to shutter speed, aperture, ISO and principles of composition.

After the course, Roberts and his staff of professional photographers will leave four cameras behind and two licenses for photo-editing software.

The kids’ work will go on display with photos by past students at the Aga Khan Museum from April 30 to May 31 as part of the CONTACT photography festival.

After the workshop is over, the students can continue getting feedback on their pictures in a private Facebook group, Roberts said.

But the class is meant to leave them with more than just an understanding of framing and exposure, he noted.

“This is an empowerment exercise. We give them photography as a language to go out and say something.” 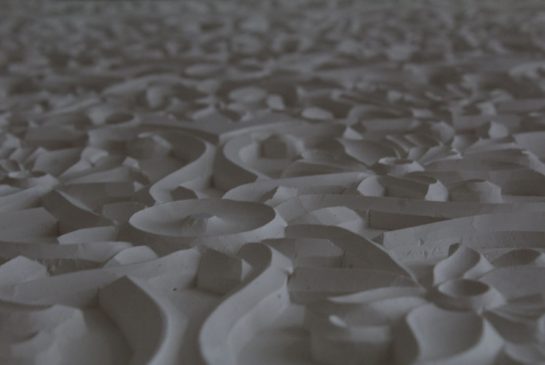 Photo by Tuba Aman, a participant in the recernt workshop, of a bit of art found at the Aga Khan Museum.

Tuba usually takes pictures on her iPhone, but at the workshop she learned that Instagram filters aren’t necessary to make a good picture.

“I really like how some of my pictures turned out,” she said. “The focus and lighting were perfect. Sometimes I’m shocked I actually took that picture.”

The Gr. 10 student who wants to become a detective — or any other job involving a little mystery — says she’ll continue to pursue photography as a hobby.

Muqaddas, a Gr. 9 student at Marc Garneau Collegiate Institute and aspiring lawyer, didn’t know much about photography until taking the workshop, she admitted. When she got hold of a digital camera, she didn’t understand what many of the buttons did.

That changed after a few lessons. “Now I can take pictures in focus and all that stuff,” she said.

“It’s so fun,” Sameer said about the workshop. “It’s not tough. You enjoy the assignments they give you.”

He learned a new technique to blur his pictures by zooming in or out after hitting the shutter button. He put the lesson into practice almost immediately, taking blurred shots of a guitarist and trumpet player at the museum.

“I just used to take pictures without knowing what I’m doing and they used to come out really bad,” Nabil said. “After taking this workshop I learned how to take proper pictures, proper exposure, get the right light balance and all that stuff.”

He may use his new-found knowledge of photography to take portraits of people over the summer and make a little pocket money, he said.

If he could photograph anything, he said, it would be the Burj Khalifa, the 829.8-metre high skyscraper in Dubai, the tallest building in the world.

Aria was proudest of some close-up shots of berries she took outside the museum. She also captured the building’s reflection in a puddle after the rain on Monday.

All her pictures were taken in manual mode, as per her teacher’s instructions.

“Instead of an iPhone, we learn how to use an actual camera and your own imagination to take a picture,” she said.