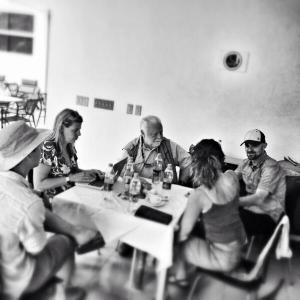 In the end, the Nicaragua chapter of the FR Photography Workshops turned out just fine, thank you. But getting there tested all of the strengths of the program, and in the end it proved itself to be more than up to the task.

I am often asked to articulate the most critical element of a successful program such as ours. While it’s easy to focus on raising the funds, planning the locations and partners, handling the logistics and coordinating the multitude of schedules, in the end it’s all about fielding a great team. This was definitely proven in Nicaragua.

Whenever you’re planning work in Third World countries, governments are always a concern. Rules are unclear and the enforcers are often confused, fearful, aggressive or corrupt. To combat this, one has to plan carefully in advance. A great concern for us is always our equipment, specifically getting all of it into and out of the country safely. As a result, we have a template with a detailed description of all the equipment: 20-22 professional cameras, 4 MacBook Pro laptops, software, and all of the attendant cables, connectors and electrical items.

We also bring a certified list from U.S. Customs, which allows us to repatriate the equipment without question. In other words, we’re experienced, organized and prepared. If our partner’s country is a signatory to the ATA Carnet System, then we have no problem. Nicaragua does not participate in the Carnet System, so we sent all of the information to our NGO partner months in advance so they could handle the customs issues in plenty of time.

Two days before our departure, we were told that there was a “problem” with Nicaraguan customs. We quickly distributed the maximum number of cameras we felt comfortable bringing in (5) and all four of the laptops. I was told by the NGO that there was a good chance that we could get the rest in on our arrival. How wrong they were.

Our bags were X-rayed, and I was immediately pulled to the side to open the Pelican cases and explain the contents. I had purposely put our printed curriculum materials in the cases to make it clear that this was not commercial equipment. The customs attendant stared blankly into the cases and told me that their bosses had gone home for the night. They would therefore keep the cases at the airport, and I had to return in the morning to deal with their superiors.

For the next two days, I was shuffled from office to office, all with endless waits, to face the worst of bureaucratic indifference. No one could tell me why I couldn’t bring in the cameras. They just said that they thought it was forbidden, and they didn’t have the authority to do anything about it. At one point, they suggested a tax of over $1,000 (which I presumed was a suggestion of a huge bribe)…but even that did not materialize, as the big boss, who could approve such an amount, was “busy.”

In the end, we were never able to bring the cases of equipment into the country. Two days of excruciating anxiety, in tropical heat and humidity, with endless waiting and the blank and hostile faces of the Nicaraguan customs people, came to nothing. So much for experience and planning.

But this test was definitely within the capability of my faculty. While I was dealing with this, I asked them to proceed with the planning of the stories as if I were there, and as if there were no problems with the cameras. They did a masterful job.

The NGO had a few cameras, which we borrowed. The stories and local itineraries were finalized. My team devised a system of sharing cameras, and obtained extra memory cards to ensure that all students would have equal access to the existing cameras for shooting their photographs. In the end, with the exception of one failed memory card, and four students who came a day late, everything went on without a hitch.

When you see the slideshows, you won’t be able to find any evidence of the problems we faced. The work was great, thanks to the superb efforts of a great team. If I did anything right in the creation of these workshops, it was attracting the right people.