One of the major challenges of our workshops typically lies in figuring out the stories that our students will work on and all the logistics involved. Our goal is to first determine the stories that are important and lend themselves to a visual storytelling approach. Once we do that, we need to figure out how to get all 20+ kids, chaperones, translators, and instructors across town at the right time of day to engage these stories. Additionally, on this trip, we are returning to put on an advanced workshop. This means that we also have to plan stories for our students from our previous workshops as well…all within the two days we allot for scouting and logistics! It’s easily as big a job as it sounds.

The success of course lies in doing as much of the research and scouting prior to our arrival. However, this rests entirely on the shoulders of our in-country partners. For this trip, our team in Hyderabad spent several days researching a variety of stories before we even got here. Now, it’s up to us to jump in the car and visit all of the potential sites they’ve found…all 35 of them, in just two days!

Today’s reccy was devoted to one of the larger stories (ideologically) on our roster of potentials: the direct effects of urbanization in the greater Hyderabad area on the landscape and culture of the people. Since Hyderabad is an arid climate, water is an important resource. The primary source for water in the area is the Musi River. In fact, the Musi River is not only the life blood of the people of the region, it is also an object of religious admiration.
Leigh Fischer and her team from the Aga Khan Academies, led our group on a trek that traced the river all the way to its source…about a 2.5 hours drive from the center of Hyderabad. We found that the source was nothing more than a small stream that bubbles up from the ground located on the top of a remote and dusty hilltop. Believed to be a holy place, a temple was built around the stream and a small step well was constructed to capture some of the water for the local residents…for drinking and cooking, and swimming too apparently. 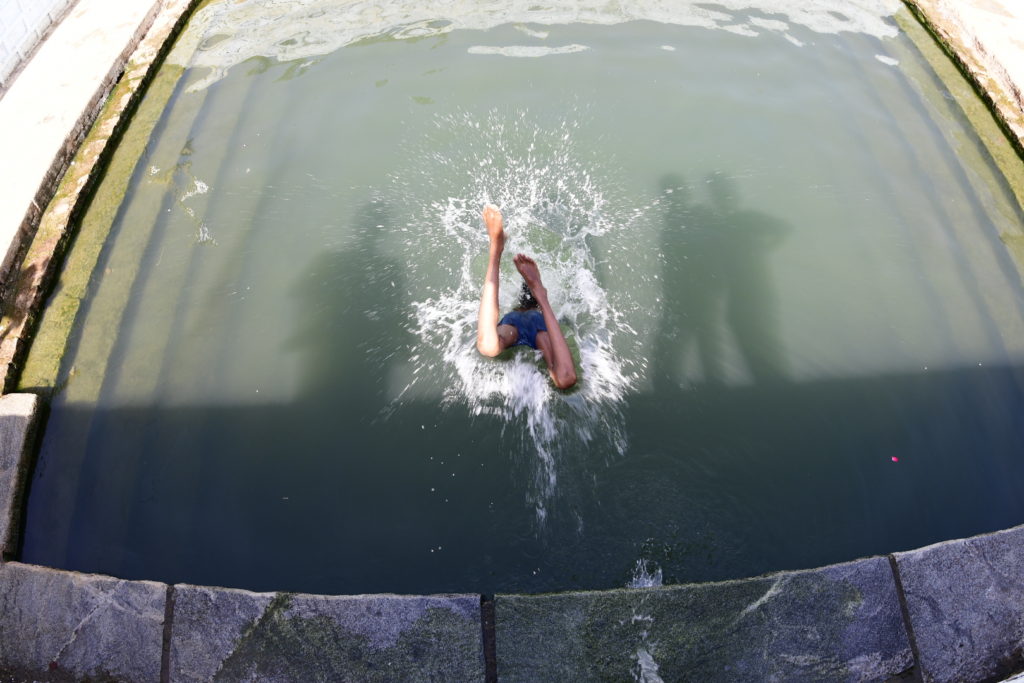 Our team followed the river through the countryside as it wound its way from the modest temple and journeyed to the city to fed local farmers’ fields. We were however, surprised to discover that it then disappeared underneath a dry riverbed. In certain places, locals would dig large temporary wells to reach the water below the surface. As we were making our descent through the scrubby hills, out of nowhere we could see a lake. Apparently, in the early 20th century, a local governor noticed the humble stream winding through the shallow valleys and decided to build a dam to secure water for the burgeoning city of Hyderabad. Now, more than 100 years later, that water sustains the livelihood of the city…but only just.

In the end it was decided that after having spent the whole day following the Musi, this story is far too vast and complicated to be covered by only a dozen students over just three days. We were, however, able to latch onto some details and are sure that we can still tell the story of the urbanization of Hyderabad with our students over the allotted time…but only tomorrow will tell!