Today started bright and early…especially early after a long day of planning and the additional late night class that was added to yesterday’s’ agenda.  Last night, as part of the class, we divided the students into three groups; one group dedicated to the Urbanization project (with Wendy in charge), and the other two groups focusing on the Footsoldiers (led by Fred and Esha). 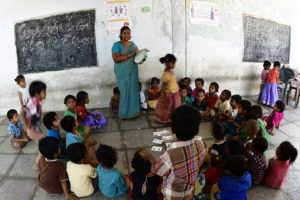 Wendy’s group was the first to head out on assignment this morning at 8am to their first destination, a brick making facility. Fred and Esha’s groups left shortly after and spread out to visit Footsoldiers at various community centers in the area.  Today, I rode along with Esha’s group to witness a few magnificent community servants in action.  The seven of us piled into a little Honda wagon and zipped off through the choked streets of Hyderabad and out into the sprawling country.  Our first destination was a small community center enclosed by a concrete wall. The total space consisted of roughly a half-acre yard that housed four structures; three concrete water towers and a tiny two-room classroom.  The classroom was minimal…around 15’ x 15’…not including a small covered porch connected to the back of the unit that’s used as a kitchen.  Our “Footsoldier,” G. Amrulha, was a woman of average build in her mid-late forties with a seemingly endless amount of energy.  Throughout the day, she leads the students in a series of energetic learning activities exploring a range of topics.  For one activity, she handed out handkerchiefs to each of the students and they exaggeratedly pretend to sneeze or cough while covering their mouths with their cloths, their hands, or into the crook of their elbow.  They also did things like sing the alphabet, count to 10 using a Twister-esque floor mat, and take turns jumping to touch a rag dangling from a string overhead.  For a little break they sit together to talk about nutrition as they eat a boiled egg.

All the while our students were slinking around the walls, shooting from the porch, and even from outside the windows trying to capture the story of this woman’s work without getting in each other’s shots or completely disrupting the class.  Our students covered Amrulha from every angle and after a short hour, we were on a time crunch to move to our second location.  Earlier in the day we had split into smaller subgroups and were covering two of these facilities at the same time…when our time was up, we simply switched locations.  The second location was similar in practice but the facility was probably five times the size and had a staff of six women…opposed to the previous location which only had a staff of one.  Our second location also had similar activities for the young children as well as provided services to new mothers.  While we were there several women visited with new children to be weighed and measured…not only that, but the footsoldiers here also fed these young families! 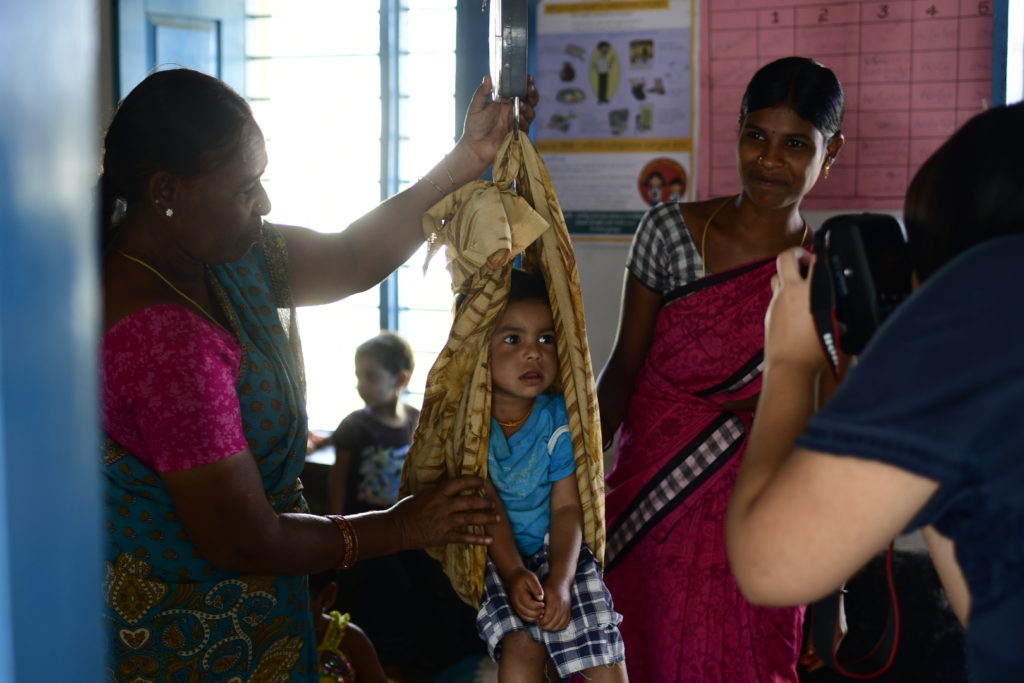 After a long morning of shooting, we were able to re-grouped and make our way to lunch to meet the rest of the gang….only a handful of us got lost on the way! Not too bad considering these parts can be a little tricky to navigate! Over lunch we heard stories about Fred’s group who had been photographing footsoldiers at different locations and Wendy’s group who spent time in a brick making facility – everyone had a great time! After lunch we got back to the classroom and proceeded with our download, edit, and critique.  With the students driving the computers, we downloaded all of our images and sat around for nearly 3 hours looking through the thousands of shots from today.  After a short break we turned off the lights and as a whole class reviewed the five best images from each student in the class.  Wow!  There are some great images – can’t wait to share them!