Our Arrival Into Nicaragua 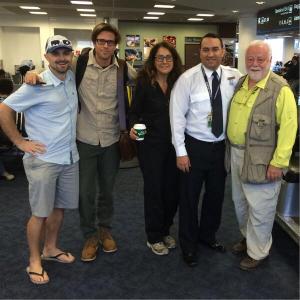 Mike, Dan, Amy and Fred pose with a security guard at the airport on their way to the rainforests of Nicaragua.

We loaded into a giant white bus and set out north from Managua toward the mountains, Macizos Peñas Blancas. Multi-storied complexes of malls and food courts shrank into single-story concrete and tin-roofed shops, and then into small wooden kiosks under trees. Soon the concrete and the asphalt, the painted billboards and colorful houses gave way to the brown and red brush of the rolling flatlands. For two hours, we drove through ranch land and small towns along roads lined with kiosks and produce stands. Carts drawn by horses and made from car axles and tires, bicycle taxis with a bench and two wheels where the front wheel would be (caponeras), and people riding two up on bikes, made the same journey, much more slowly, from the shoulder of the highway. The landscape finally melted into a flat diorama of color and people, and we left the city far behind.

Eventually we climbed out of the flatland and began to ascend through the stratified ecosystem until we reached the rainforest. The sun was low in the horizon and the slanted light streaked through the quickly thickening forest. We followed the contours of the hills, winding wildly left and right as the road wrapped itself around, then up, and then over the tree covered forest.  We climbed the steep drive to La Sambra, the last three kilometers using the last 20 minutes of light, and reached our destination high in the thick forest just as the sun dipped below the horizon.

May 24, 2014 at 12:24 pm
Nicaragua Workshop
nicaragua, photography, save the children, travel
Mike Sakas