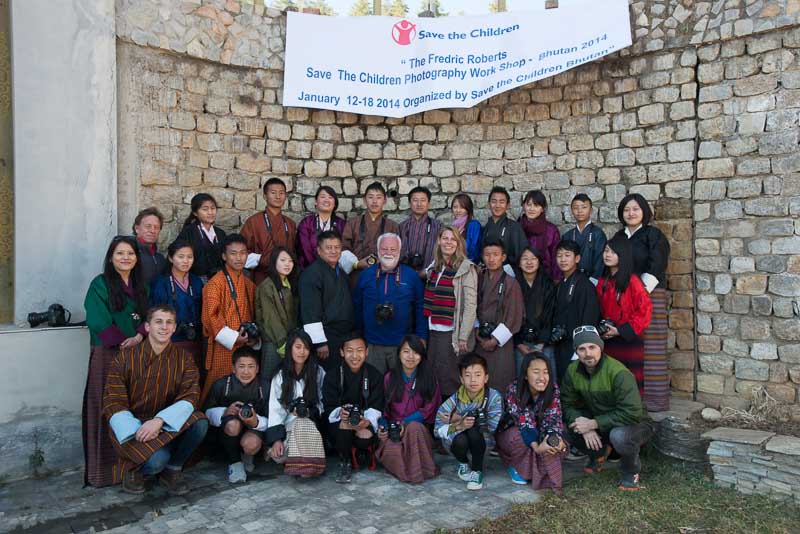 Another long and productive day for us in Thimphu today, but it was fantastic! We started with our photo critique and then took a break for our class portrait.  Will and all of the students got dressed in the traditional Bhutanese outfit: Gho (for boys) and Kira (for girls).  The Gho is a single robe-like garment that is tucked, folded, and finally wrapped with a tight belt into an elegant men’s outfit that loosely resembles a banded collared jacket with a kilt.  The women’s Kira is a two-piece outfit that is a combination of a folded wrap skirt and a short waistcoat.  Both outfits are made from a variety of fabrics, traditionally with bright colors and wonderful textures.

After we made our class portrait, we broke for lunch and then headed to Thimphu for our assignment.  Yesterday’s intro to storytelling was pretty successful, but today we were to be tested.  Our four groups combined into two sub-groups that went to different locations to photograph our stories.  Fred, Thomas and Will headed out with the students to photograph a story based on the lives and support available to students in Bhutan with disabilities. Their assignment was located at the Agility Bhutan Services, where a team of facilitators and educational specialists provide services to children with muscular dystrophy, cerebral palsy, and other challenging conditions. 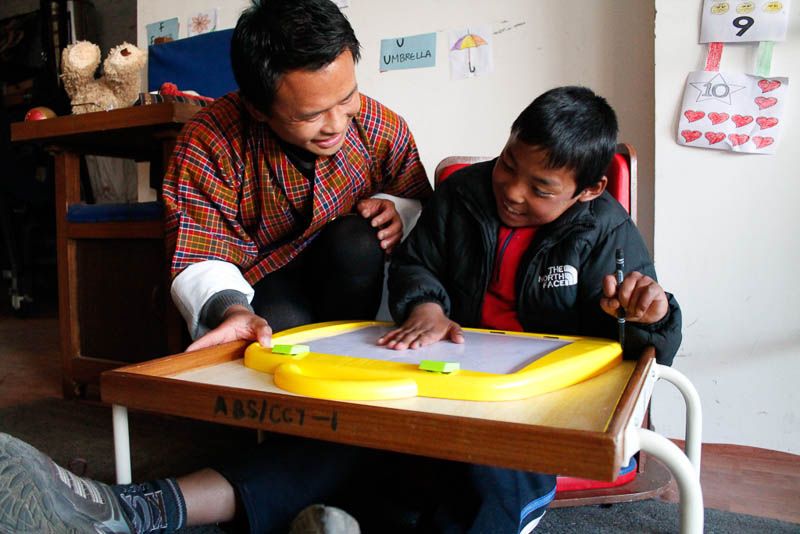 The students were not only challenged to depict center’s wonderful work and the difficulties these amazing children overcome, but they also came face to face with a world with which most of us rarely engage. The task was emotionally and intellectually difficult as well as technically challenging: the students followed a group of children around the center while they engaged in therapy, and then headed to some of their homes where they were invited by the families to observe the everyday life of these children. A powerful assignment indeed– and I think that when you see the images, you’ll agree.

Sarah and Sakas’ groups were sent to photograph completely different (but no less challenging) subjects.  These two groups were to collect three different kinds of stories relating to issues of a developing Bhutan.  They were instructed to capture the narratives of young entrepreneurs who were creating a better future for Bhutan through their enterprises at a recording studio, a hip-hop dance group and a recycling co-op.  Each of them had seen a need and an opportunity, and decided to tackle the issue head on.  Our intrepid photographers headed into technically difficult and challenging situations, and had to deal with a range of subjects ranging from crazy acrobatics and fast moving dancers to piles and piles of trash. They coped with wildly varying lighting conditions, from the screen-lit, cave-like space of the basement recording studio, to the bright sunlight of a setting sun and the varying conditions of a partly covered and partly exposed garbage pavilion.  All in all these photographers took on the challenge and made intellectually interesting and visually challenging subjects sing in photographs. 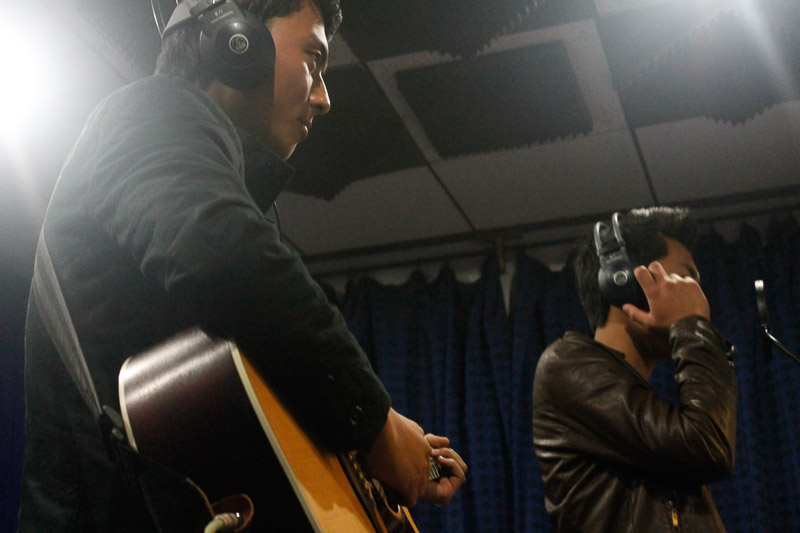 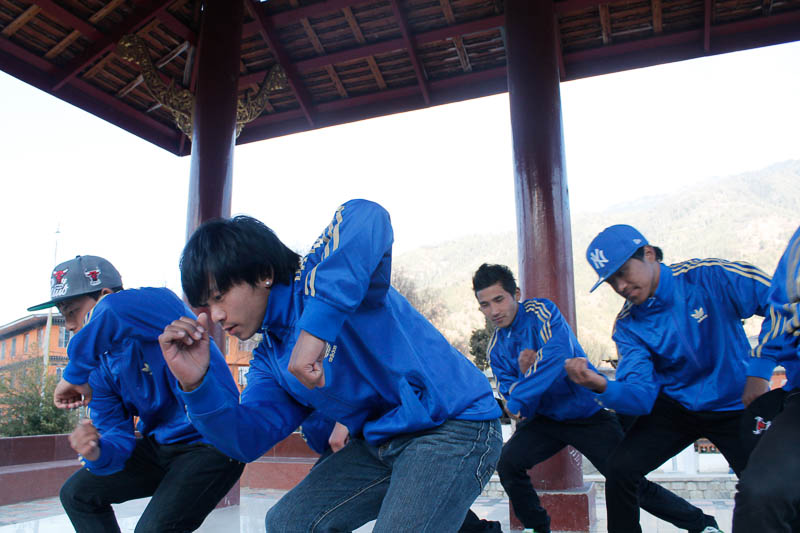 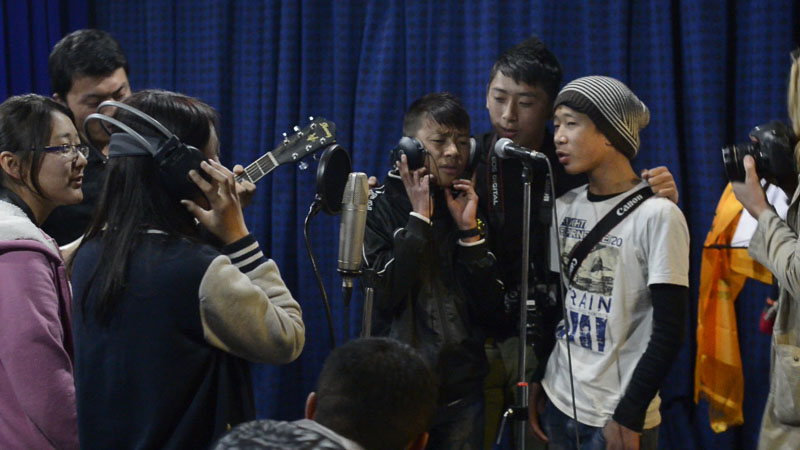 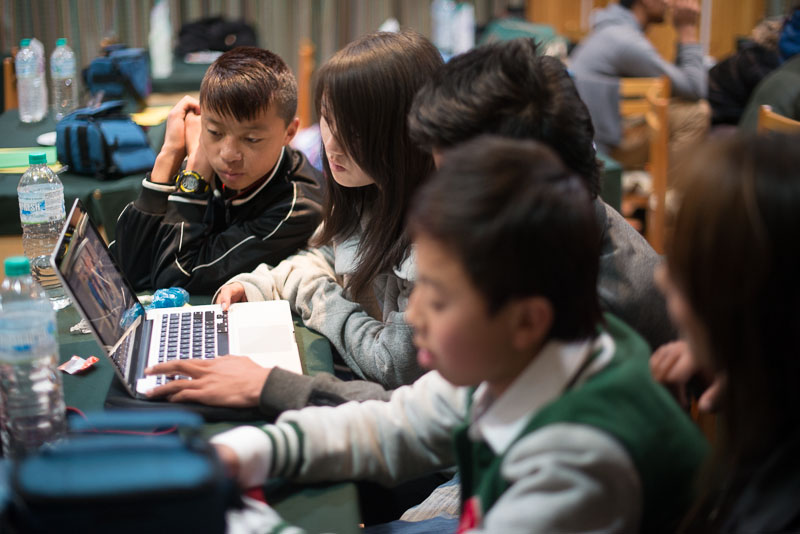 After all of this, we still had to drive back to Thimphu, then download, eat dinner, edit and prepare our days’ shoot for critique.  Remember that carsickness-inducing commute we mentioned earlier? Now we are making that trip twice a day in a mini-school bus.  After all of this, though we are physically and emotionally drained, we have one more event for today: a bonfire.

After dinner, the hotel staff light a big warm fire for us in the courtyard between the classroom and the dining room, the guest rooms and the valley below.  The students have prepared some entertainment for us and they come out to the fire dressed in their Gho and Kira.  They launch into a traditional Bhutanese dance, accompanied by music at full volume from one of the students’ phones sitting in a copper bowl.  The boys and girls pair off and twirl and circle each other until they can’t contain themselves anymore, and laughter replaces their respectful composure.  Up next is a solo performance by one of my quieter students: she does a contemporary Bhutanese dance piece, again aided by the music from the tiny mobile phone in a pot.  The music is barely audible above her sliding footsteps, but she dances the whole routine beautifully, and we all applaud. 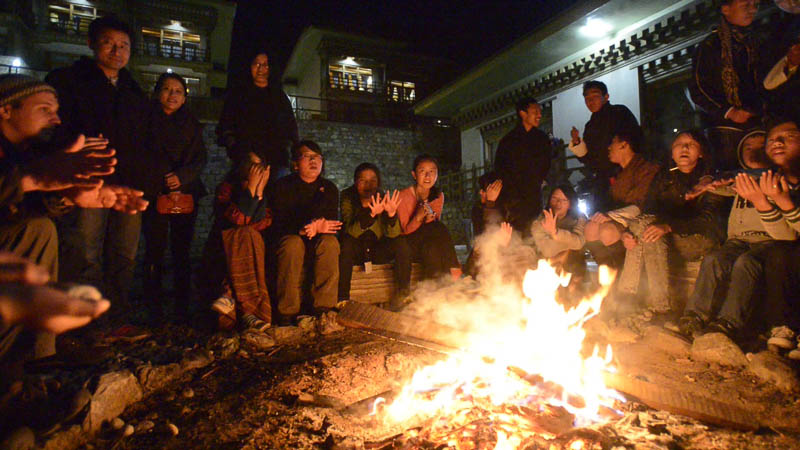 After one more number (which again can’t maintain its austerity), all of the students and instructors huddle in closer to the blazing fire. We’re all half frozen and half roasted.  For a while we sit, and then a singing competition breaks out between the boys and the girls. One group sings a part of a song, and the first letter of the last word sung needs to start the first word the opposing group begins with in their next song.  A constant stream of song clips, like a bad road trip DJ, goes back and forth between the boys and girls until we wind down the end of the night sometime after midnight…everyone tired, but reluctant to leave the warm fire and the camaraderie.