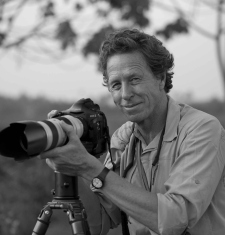 Thomas L. Kelly first came to Nepal in 1978 as a USA Peace Corps Volunteer, and has since worked as a photo-activist, documenting the struggles of marginalized people and disappearing cultural traditions all over the world. Funded by the Bill and Melinda Gates Foundation, he has been recording the lives of sex workers and the traditions of prostitution across South Asia. Thomas has worked extensively for UNICEF, Save The Children Fund (USA), DFID, U.K., Aga Khan Foundation, Institute of Child Health (ICH), U.K., on the subject of child prostitution, trafficking, reducing maternal and infant mortality, conflict and resolution, and numerous other subjects. His editorial work has appeared in publications worldwide, including The New York Times, TIME, Newsweek, National Geographic and The Observer. From 1990-1991, he was the corporate photographer for The Body Shop, specializing in documenting the press campaigns of the company. He currently represents the magazine Hinduism Today, based out of Hawaii.

Apart from photography, he has produced and directed films and videos on prostitution, violence against women, and esoteric ethnic practices, among other subjects for Discovery Communications, USA, National Geographic, and the BBC. He has researched and photographed the following books: Sacred Landscape-Pilgrimage in Tibet: In Search of the Lost Kingdom of Bon, Tibet: Reflections from the Wheel of Life, The Hidden Himalayas; Kathmandu: City on the Edge of the World, Fallen Angels: Sex Workers of South Asia, The Tibetan Book of the Dead, Millennium: Tribal Wisdom and the Modern World, and Cultural Traditions on Hinduism-Sadhus.

Apart from photography, Thomas is an avid yoga/pranayama practitioner. He lives in Kathmandu with his two sons and wife, Carroll Dunham.