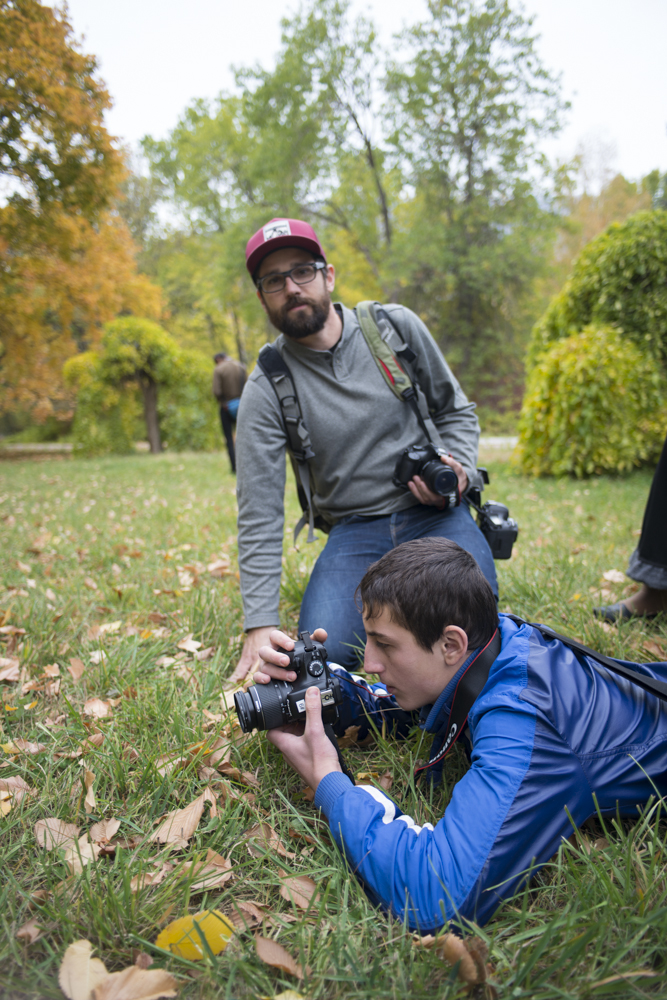 Take forty or so adorable little gremlins (aged 3-5), put them in a room filled with books, building blocks, paint, crayons and musical instruments, and set a handful of incredibly talented teachers to shape their young minds…and you get the best kind of organized chaos.

These guys were everywhere! In one corner, six kids were jumping off the stage while a pile of boys wrestled roughly nearby. Another group of kids was banging on an old piano (that had clearly been similarly treated in the past); in another area, a pair of twins was taking turns dragging one another by their hands or feet across the floor on their knees and bellies; and elsewhere, teachers cuddled with students to read books, paint, or just plain make a mess. All of our students had small group time and large group time taking photographs…and on top of that, they sang and danced and shared with the group what they’d learned. We even had snack time with the kids at the center. It was a morning of high-energy photography and I’m not sure who was crazier, the little ones or our photography students!

Fred, Tony, and Wendy took their groups to early childhood development (ECD) centers in villages surrounding Khorog while my group remained at the Lycee School to photograph their ECD program.  All of the groups were supposed to return before lunch so that we could eat together, but when Wendy’s group was half an hour late, the other groups decided to go on without her.

We ate lunch and were back in the classroom by the time Wendy’s group made it back with a story to tell. Apparently, one of the students in her group (the Red group) lived in the village where their ECD center was located. In the time that it took Wendy and her group to photograph the school, this students’ family found out they were in town and prepared a typical Tajik lunch (three full courses) for all twelve people in the group: Wendy, her students and the translators!

The hospitality and friendliness of the people we’ve met so far have blown us away…the openness and generosity of the people we are lucky enough to work with on these trips never ceases to amaze us. Some of the people here even gave Fred a pair of thick traditional Tajik wooly socks!