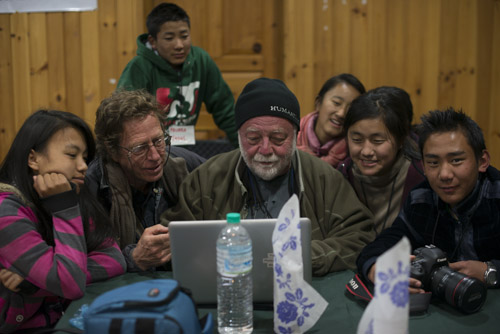 Tonight our group edited 3,994 images from today’s shoot.  That is either an indication that we’ve been photographing some pretty amazing stuff, or that the kids are drinking too much caffeine.  It could also be a little bit of both.  It’s nice to know though that we are indeed working them hard enough.  Pretty much everyone fell asleep on the bus ride home this evening and we’re taking that as a good sign. But let’s take it back to the start.

This morning we started pretty bright and early with a 7:45 breakfast time.  At 8:45 the students got their cameras and a quick briefing and we were in the buses heading to Thimphu for our first stop of the day.  We headed to the Early Childhood Development Center on the edge of a government housing development. The small tin and wooden homes packed tightly against one another were home to many of the city’s government paid workers, street sweepers, road crews, maintenance crews, etc. The ECDC is a facility dedicated to providing working parents support in the form of early childhood educational and care programs.  A small, three-room building with two classrooms stocked with educational materials and staffed by some of the most wonderful and energetic Early Childhood teachers I’ve seen. 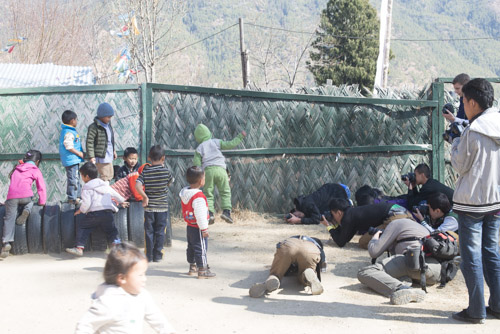 The children sang songs, meditated, played games, colored and practiced their alphabet while our students ran amok photographing the classroom goings-on and the play facilities outside.  We also explored the housing situation and got to meet a lot of the parents who were home on vacation.  The assignment for our students was a challenging one but they definitely gave it their best effort with some students clocking in at more than 1100 images before lunch!

After lunch we headed out to a local park and one of the several stops in the Thimphu area for Save the Children’s first of its kind Mobile Library Bus program. The bus, fitted with a double-sided bookshelf bolted upright down the center of the bus, makes scheduled stops throughout the city once a week at each location with each stop lasting approximately two hours.  Knowing that the space in the bus would be limited, we split our groups in half and sent the first group of kids into the park and to a local football pitch, while the first group got to work on the bus.  After the allotted time, the bus moved to its second location on the Royal Bhutan Army Base and the groups swapped subjects.  Our group got the second shift and when the bus arrived, we were shocked to see dozens of children running out to greet the bus! 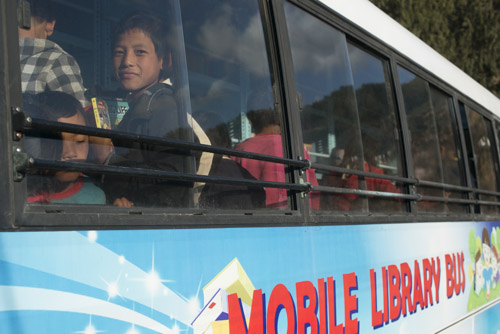 As soon as the doors opened the kids stormed the bus and began pulling out books to read.  The children’s enthusiasm for books was quite a sight and our students were super keen to interact with and photograph the little readers. The afternoon went by altogether too quickly as our photography students ran circles around the bus and it’s occupants who were themselves a storm of enthusiasm!  It was so fun to watch. 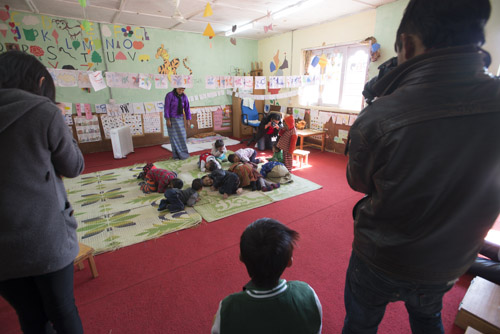 When we returned to the classroom we had a lot of work to do. Downloading all of the images, we launched into our normal routine. By dinnertime, nearly 2 hours later, we still hadn’t finished going through all of the images. Even after dinner, Sakas’ group couldn’t finish before the 10pm BBS I news broadcast that featured the story on our workshop, which had been filmed the morning before.  Hopefully we’ll get to post that up here and share it with everyone who has been encouraging us and providing us the opportunity to work on this incredible project!